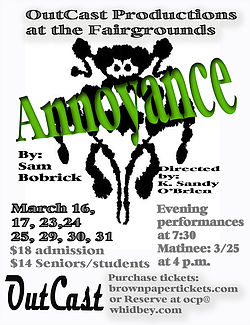 "The edgy, physical, over-the-top comedy brought gales of laughter from audiences. The enthusiastic applause at the end of each performance left no doubt that this adult comedy was a hit!" - Charlie Tyler, Boca Beacon

Outcast Productions begins its 8th season with Annoyance, a comedy by Sam Brobick, which opens on March 16th and plays for three weekends at the Outcast Theater at the Fairgrounds. The show is directed by Sandy K. O’Brien.

Everyone experiences annoying people in their lives. This is the feeling you get when someone makes you feel angry or impatient (of course, you can also be annoying to someone else).

Of course it doesn't go as planned.