Second Hand Booty in Clinton: One Person’s “Stuff” is Another Person’s Treasure 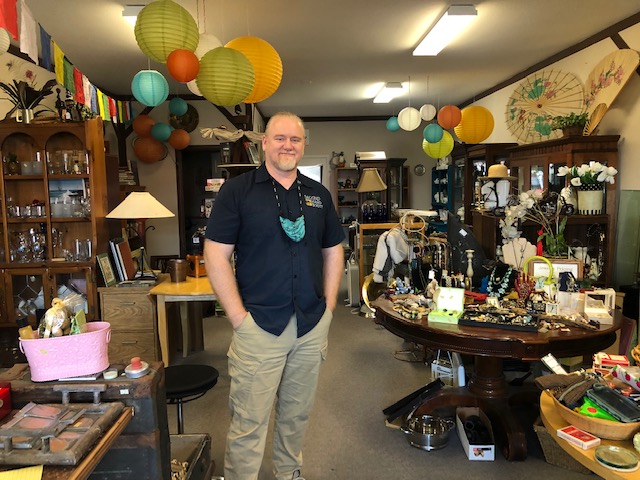 Dustin Yongue created Second Hand Booty because he discovered people loved to buy things they will treasure that other people don’t need or want anymore.

Like so many Whidbey people, he didn’t plan to make his home here. Dustin and his wife had lived in Bellevue for several years and came to Whidbey many times for vacations. One day Dustin told his wife: “We should move up here.” Dustin comments: “Life was going too fast in Bellevue. I wanted a change.” 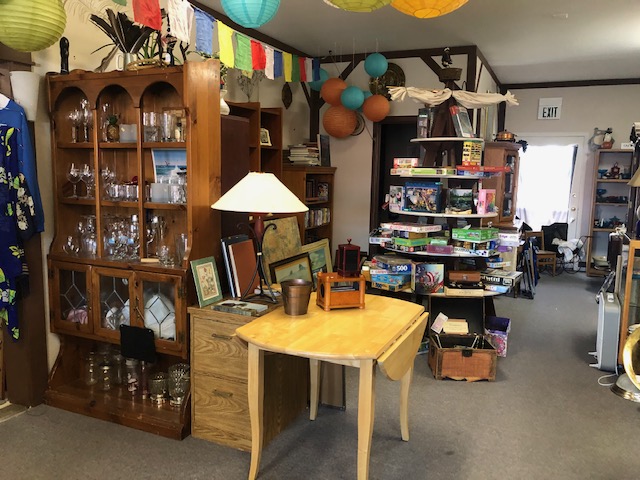 Dustin had been a decorator for most of his life in Bellevue and Alaska. In Bellevue, he managed food banks and a Habitat for Humanity store. He also did interior decorating and furniture staging for furniture stores.

But, in his mind he had an idea for a different kind of thrift shop. The beginning of his idea becoming a reality began when he saw a “for rent” sign in Clinton, in a small shopping center near the Clinton Food Mart.  He rented the space three years ago, and for a while commuted between Bellevue and Whidbey. He and his wife made the move to Whidbey in August 2020, and they found a house on the island (his wife still commutes to her job in Mukilteo).

Second Hand Booty is supported by many people who bring by donations for the store, and by the five people who take turns working at the store. 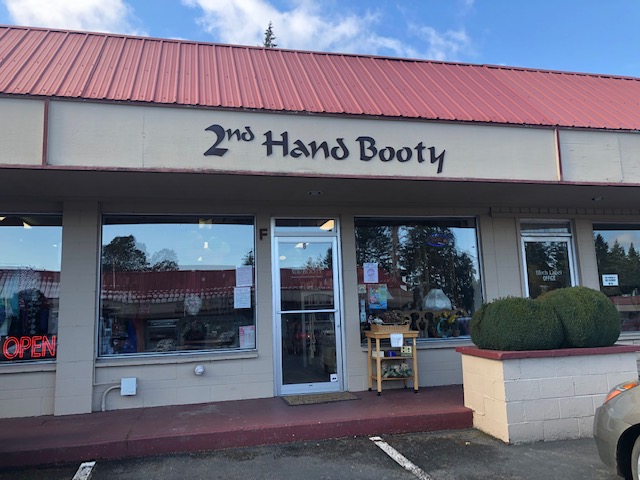 Dustin selects the prices for the items that will be for sale: “I price them so that people can afford to buy them.” He generally prices newer items at about one-third of their retail value. All clothing is $5, all purses, scarfs and shoes are $3.

In the beginning Second Hand Booty specialized in designer items, but when Covid began affecting people’s lives, he noticed an uptick in the number of different items being brought to the store to be sold.

As word has spread about Second Hand Booty, Dustin has become aware that he has many regular customers: “I estimate that 90% of the business comes from people living on Whidbey.” He notices that many of these regular customers (and others who learn about the store and stop by) come into the store and spend an hour walking around to see what’s new.

Cliff at Birch Labels next door created the logo and logo labels.

here is a short video on You Tube that provides a description of Dustin and his shop: https://youtu.be/NZ2XhWObXng -

Stop by and check out the amazing variety of items!

Dustin feels a real connection to the Whidbey community and likes to make contributions to help non-profits on the island. In March the store will help provide a fundraiser for the Philanthropic Education Organization (PFO).